Great addition to the series! *Due to the content this isn't recommended for readers under 18.*

Story: This series has quickly become my guilty pleasure because it's one of the most authentic male POVs I've come across. Even though I liked them as side characters, I wasn't sure how invested in Matthew and Delores' story I would be, but I ended up THOROUGHLY enjoying this! Matthew and Delores are both raw, honest and hilariously inappropriate characters who made me laugh, choked me up and caused me to blush a few times too (HARD). We also get a glimpse of Drew and Kate's budding relationship and more insight into Alexandra and Stephen too. (I hope we get to read their story eventually!)

Audio: Deacon Lee does a fantastic job capturing Matthew's endearing arrogance and Delores' quirky personality and bringing them to life! My Thoughts:
I had the privilege of reading a very early version of this, something I'm still smiling about! One of the reasons I enjoy Miranda Kenneally's books so much is because of her writing style, it's clean, crisp and easy to follow. The other is because she gives us characters who are wonderfully human, perfectly flawed and easily releatable, and Annie and Jeremiah are no different. Breathe, Annie, Breathe, is a story about taking risks, learning to love again and finding yourself in the process.

Annie is trying to find a way to deal with her grief, having lost her boyfriend Kyle not too long ago, and Jeremiah is working to repair his relationship with his family. He's an adrenaline junkie who thrives off of taking risks and looking for the next high, even if it means he ends up hurt. Their attraction to each other is palpable right from the start and even though Jere is by Annie's side both in and out of training, it's easy to understand why she's afraid to move past the "Friendzone" with him. Doing so would mean putting herself and her heart on the line again, something Annie isn't sure she can do. But life is full of risks, you just have to decide which ones are worth taking.

As with the other books in her Hundred Oaks series, Breathe, Annie, Breathe, can be read as a stand alone, BUT, it's a lot more fun to read the previous books first, because Sam Henry and Matt Brown especially since some of those characters appear in this one. One in particular had me seriously considering training for a marathon, but then I remembered:

A) I hate to run. Unless, of course, Matt Brown was at the finish line holding the next Hundred Oaks book, then I would make an exception.

B) The 5k I ran a few years ago nearly killed me. (Not really, but it sure felt like it.)

C) I couldn't actually hire him to train me because Matt Brown is fictional. *pouts*

And then there is Jeremiah Brown...

We're first introduced to Jere as Matt's younger brother in, Things I Can't Forget, and I never had any doubt that I would love him like I do Sam, Will, Matt and Jack, but after Breathe, Annie, Breathe, I don't just love him, I LIGHTENING BOLT Jeremiah Brown! So much so, Andi from Andi's ABCs and I decided to have buttons made before BEA this year. 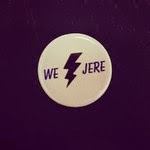 I may not have been able to relate 100% to Annie's desire to run a marathon, but I could totally relate to Jere's need for adventure. I like adventure too, I'm just a little more safe selective about mine. For example, I'm terrified of heights, but I love to ride roller coasters, the faster the better, and I even jumped out of an airplane a couple of years ago. But you will not get me on a Ferris Wheel. Ever.

Breathe, Annie, Breathe is an excellent addition to the Hundred Oaks series and I'm really looking forward to where these characters take us next!
Miranda Kenneally Favorites YA sourcebooks Contemporary

The Kiss of Deception by Mary E. Pearson THIS COVER IS GORGEOUS and SO on point with the story, I just want to stare at it all day long.

I can not say enough good things about this book. READ IT. And this is coming from someone who is not a huge fantasy reader. However, The Kiss Of Deception is a beautifully written story that unfolds through multiple POVs with characters who come to life on the page. READ IT. This is not your average we're-going-on-an-adventure-to-kill-rescue-the-princess-and-live-happily-ever-after-story. READ IT. The plot is twisty turny and filled with love, loss, magic, and kissing. READ IT.

Favorite Quote(s): "I found her once. I would find her again." I have been away from Mercy Falls for three years now, which equates to something like two decades in wolf years, right? Or is it the other way around? I can't remember. Either way, it's a really long time with a couple hundred books thrown in to muddy the waters of my bookish brain where Cole St. Clair and Isabel Culpepper are concerned.

I started SINNER, knowing full well I wouldn't be able to blast through it because Maggie Stiefvater is an author whose writing intimidates me in the best way possible. Once I made it about a third of the way through, I stopped, and had to go back to where it all began. I ended up downloading both the digital and audio copies of SHIVER, LINGER and FOREVER and proceeded to binge read/listen to them all within a span of 36 hours before finishing SINNER.

Maggie has said she considered herself finished with Mercy Falls when she wrote, FOREVER, and there is a part of me that wishes she had been, or that she had been able to publish SINNER before now. Why? Well, on the one hand, it does gives us the "what happened after" story with Cole and Isabel, but on the other hand, SINNER really is it's own story and almost feels like it has no place within the series at all. Had I not read the other books first, I'm not sure I would have been as fully invested in Cole and Isabel like I was.

Cole is Cole. Witty. Engaging. Awesome. He's one of those characters that is virtually impossible NOT to love, but Isabel is the opposite. She's cold and harsh and unless you know her back story, have watched her experience the pain and heartache that has made her the way she is, it can be difficult to care about her at all.

Don't get me wrong, I enjoyed SINNER, I did. It makes a great addition to the other books and there is definite closure, but, I don't know...I think I missed the paranormal element that was so prevalent in the other books.

Audiobook: The Things You Kiss Goodbye by Leslie Conner

This Song Will Save Your Life by Leila Sales

Broken Hearts, Fences And Other Things To Mend by Katie Finn 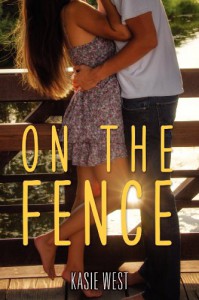 I'm a huge fan of Kasie West and THE DISTANCE BETWEEN US was a favorite of mine last summer, so when I had the chance to read ON THE FENCE, I jumped at it.

I liked Charlie and her all-boy family dynamic and being the daughter of a cop myself, I could totally relate to the awkwardness of her relationship with her dad. Braden was probably my favorite character and his interactions with Charlie, both during the day and along the fence at night, made me feel all warm and fuzzy.

We also got a teasing glimpse of Caymen and Xander, although she (along with those creepyars dolls) is the only one who shows up on the page, albeit briefly. Skye played an important role in Charlie's story and I enjoyed getting to know her a little better. If I had to guess, I would say her story is up next.

My only qualm with ON THE FENCE was the lack of "together" time Charlie and Braden actually had after declaring their feelings for one another which left me frustrated. But as with West's other books, PIVOT POINT and SPLIT SECOND included, ON THE FENCE is fast paced, full of swoon, and clean. It makes for a fun summer read!

Breakable (Contours of the Heart #2) by Tammara Webber For Monroe Blackwell, one small mistake has torn her family apart –leaving her empty and broken. There’s a hole in her heart that nothing can fill. That no one can fill. And a summer in Louisiana with her Grandma isn’t going to change that…

Nathan Everets knows heartache first-hand when a car accident leaves his best friend in a coma. And it’s his fault. He should be the one lying in the hospital. The one who will never play guitar again. He doesn’t deserve forgiveness, and a court-appointed job at the Blackwell B&B isn’t going to change that…

Captivating and hopeful, this achingly poignant novel brings together two lost souls struggling with grief and guilt – looking for acceptance, so they can find forgiveness.

*I received this eARC in exchange for an honest review*

Told from alternating POVs, Boys Like Youis one of those stories that sucks you in, tugs on your heartstrings and doesn't let go until you've turned the final page. In fact, I was so immersed in Monroe and Nate's story that when I came to the Acknowledgements, I was a little disappointed ONLY because I wasn't ready to let these characters go yet. (There may have been tears.)

Both Monroe and Nate have experienced life changing tragedies, ones that could easily destroy them if they allowed it. But they're surrounded by people who love and care for them, people who refuse to let what has happened define them for the rest of their lives. (Gram Blackwell was a favorite of mine!)

Is there pain and sadness? Sure. But what's cool about this story is that this isn't a walk through the darkest part of Monroe and Nate's lives, they've already been through that. We get to see some of the bleakness but this story is what happens in the aftermath. It's the, "What happens now? How do I heal?" part. And Juliana Stone has done it so well!

When you've felt nothing but an empty void for so long, it can be hard to navigate feelings and desires, especially when it involves a person who somehow understands exactly how you're feeling. And the relationship that develops between Monroe and Nate is funny, tender and bittersweet. Are they perfect? Of course not. But their journey is an honest one filled with forgiveness, healing and hope.

Who Knew Leprechauns Could Be Sexy? I'll admit, I'm not a huge fan of Fae stories, but I am a fan of all things Irish and an even bigger fan of Wendy Higgins, and I enjoyed this!

SEE ME is a fast paced, heartwarming story that is sweetly romantic and at times, laugh out loud funny! (The conversation between Robyn, Cass and their Mom on the plane cracked me up.) It's filled with lots of engaging characters and imagery that made me long for another visit to the Emerald Isle. My favorite part though, was watching the relationship between Robyn and McKale unfold.  It wasn't instant nor was it easy, but it was so worth it in the end.

There's a little bit of everything in SEE ME; action, adventure, magic, fantasy, romance and humor. And believe me when I tell you, you'll never look at leprechauns the same way again. ;)